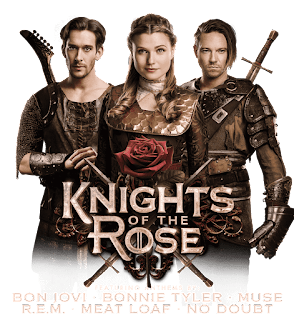 Last night, I went to the theatre with some friends to see Knights Of The Rose.   We bought the tickets when we saw the song list and couldn't resist it.  But then as the day of the show grew closer I started to read reviews, and let's just say they weren't great.  In fact they were mostly awful.

Well, let's be a little more specific; the reviews were universally terrible.

I started to become concerned.

The main concern of the reviewers seemed to be that the show was unknowing.  They suggested that whereas shows such as We Will Rock You and Rock Of Ages were ridiculous, they revelled in their own pomposity and broke the fourth wall to let you know that they were in on the joke.  No such fourth wall breaking here, and there was a clear thread in all the reviews that the show didn't know how silly it all was.

But we had tickets, and so we turned up at the theatre and chatted beforehand about just how bad this could possibly be.  And we braced ourselves and took our seats.

So, was it as bad as all that?

The short answer is "No. It definitely wasn't that bad".

Theatre reviews are like restaurant reviews in that they represent more than just whether something is fun to watch.  They like to make a point, too.  When a critic writes a review, often their attention is on signalling their own discerning taste as much as it's on passing judgement on whatever restaurant, show or book it is that they are reviewing.  If something doesn't say something profound or moving then the review often feels as though they must condemn it, for to say they enjoyed it would be to admit that they may enjoy the same things as "normal people".  The word "popular" has come to be a slur, and the word "pleasure" is always paired with the word "guilty" for no good reason.

And so, Knights of the Rose was fun.  It was ridiculous, with little plot.  But the songs were great, the cast were great singers and it was riotously camp.  So where do we start?

Well let's start with the staging and the production itself.  The set was simple, but effective.  The production is obviously lower budget than We Will Rock You or one of the Disney musicals.  The large pieces of scenery were pushed around by stagehands rather than moving of their own volition.  But this is one of the smallest theatres in London, and with ticket prices in the "can actually be bought without having to take our a mortgage" range, there aren't millions of pounds to spend on castles and ramparts.

Having said that, there are some lovely moments.  Some decent lighting does a good job creating good images and some puppet horses are much more effective than you think they are going to be at first.  Though the closest we get to pyro is a very small camp fire around which a knight prances with an electric guitar whilst singing a Muse song.

And talking of camp, the whole thing is wonderfully camp.  Knights riding into battle they may be, but their outfits are sparkly and their dance moves flamboyant.

But what complexity there was in the costumes and dancing was evidently taken away from the plot.  I didn't come to this expecting a deep plot, but I guess I was expecting there to be some sort of plot.  I don't want to give anything away, but given that there were basically no twists or surprise revelations during the entire plot, I think it'd be pretty hard to spoil it.  At half time, between us we tried to come up with the most cliche'd way in which the story could resolve itself in the second half.  We came up some pretty well-worn scenarios which could play out to give a bit of drama at the end.  The option we'd missed was that anyone inconvenient to a happy, resolved ending would simply be killed off in battle and then whole thing would wrap up pretty quickly with a song.  But I was here for the singing, not for the plot.

The songs were generally sung brilliantly with 80s-tastic quantities of reverb, even if the intros to them were sometimes a little clunky.  For instance when the character I've come to know as "the posh one with a name a bit like Toby" (I think he's actually called Sir Hugo) steps up to his beloved and says, with a straight face "Would you dance, if I asked you to dance?" it's cheesier than a welsh rarebit, and there's a titter which runs through the audience.

And with that I think we've reached my key disagreement with the reviewers, and the reason why I'd given this show a much better than 1-star review.  The show didn't acknowledge the laughter in the way Rock of Ages did but I don't think the show was taking it anywhere near as seriously as the pompous reviewers thought.  There is a moment when one of the characters says "I don't know what love is, anymore" and we all held our breath.  We were waiting for "I Want To Know What Love Is".  but it didn't come, despite the obvious cue.   I think it's beyond coincidence that false cues would be dropped in like this if the show wasn't aware that the real cues were a bit corny.

Having sat through it with admittedly lowered expectations, I think this is a show which knows exactly what it is, just happens to leave it unsaid.  Unfortunately, it's only got another three days to run, so you're unlikely to get to see it.  But if there's a lesson in this, it's that reviews cannot always be the guide to whether you'll enjoy something or not.