A sad loss to the guinea pig world...

- February 07, 2015
We lost one of our guinea pigs recently.  My lost, I mean "she died" of course. We didn't put her down somewhere and forget where we'd put her.

It's a strange situation when a pet dies. Obviously there's an emotional connection, and it's sad. Although at the same time, it's important to retain some perspective.  It's OK to feel sad, but I'm not going to be taking any days compassionate leave from work to grieve.  Which is why it is strange that we did manage to give a complete stranger the impression that we were grieving heavily.  Let me explain.

So of all our guinea pigs, Marmalade was one of the special ones.  She had an operation for bladder stones around two years ago.  Guinea pigs don't cope well with general anaesthetic   She recovered well initially but then her weight started to drop. With guinea pigs, this is a bad sign.  So we were hand-feeding her and eventually even giving her daily injections of subcutaneous fluids.  At some point during all of this, when she was very weak and not eating for herself, she managed to do something to her back leg and dislocate it.  She was nowhere near strong enough to go through the procedure to reset the leg and - in all honesty - we thought she was so ill that she may not make it through anyway.  And she seemed to be coping OK with the wrongly-angled leg.

Then there came a point when we spoke to the vet and agreed we'd just withdraw treatment.  She wasn't showing any signs of getting any better, and so we decided we'd withdraw everything except the pain medication to keep her pain-free and some regular water to make sure she kept hydrated.  Then she surprised us by deciding to eat a biscuit.  The first thing she'd eaten of her own accord for over a month.

And over the coming weeks, she ate more and more and put weight back on, and eventually was back up to full weight.  Except now of course she had a slightly dodgy leg.  She was getting around fine, but we did wonder whether there was anything we could do about it.

It's normal for most vets to put guinea pigs under general anaesthetic for an X-Ray - just to keep them still - but there are some vets who can wrap the guinea pigs up to keep them still and do the X-Ray without the need to knock them out. So we had that done, and sure enough the leg was indeed dislocated.  So much so that it probably wouldn't "go back in and stay there" particularly successfully.

And so she plodded on with her three working legs and "slightly at the wrong angle leg" for another two years.  She even got into a battle for dominance with a young, fully fit new guinea pig we introduced her two.

But in the past few months, she started to lose weight again.  We took her back for another X-Ray and the bladder stones were back.  So faced with a decision - if we didn't put her in for an operation, she would just fade away over time - or if we did, we'd run the risk of a bad recovery again. So we had no real choice other than to put her in for an operation.  Despite a brief rally afterwards, she ultimately wasn't strong enough to recover from a general anaesthetic again.

And so what to do with her.  We have a roof garden here, and so we have quickly run out of space to bury guinea pigs in a traditional way. And we didn't really just want to throw her away, so that left us with the option of cremation.  So last weekend we found ourselves at a pet crematorium out in the Essex countryside.

We turned up, with her safely wrapped up and boxed up.  The receptionist said to us "you can go straight through to the chapel".  Chapel.

So we went into the side room, carrying the guinea pig in the bag.  It was a room painted white, with a large red cushion on which I guess one is supposed to lay out your deceased pet to say goodbyes.  And there was a little book in which to write a message.

And so we stood there. At this point, we were entirely sure what we were supposed to be doing. And so we waited.  We were slightly early for our appointment time, so we expect that come 11am they'd come into the room and we could do the paperwork.  And so we waited.  Past 11am. Past 11.10am.

By now we'd been standing in the room for half an hour.  Eventually we plucked up the courage to go back out and ask the receptionist whether she had forgotten us.

"Oh" she said "we were leaving you to grieve"

And so there you have it - the receptionist had it in her mind that we had spent half an hour grieving over the loss of our guinea pig.  She was a lovely, adorable and very amiable little pig.  But I don't think we're going to spend half an hour crying over her in a chapel. 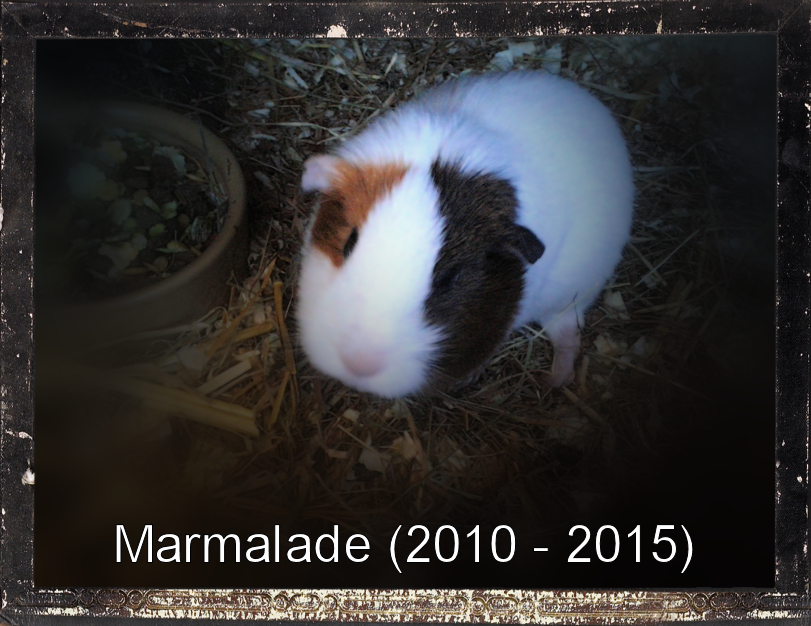