Showing posts from September, 2011
Show All

A garden in September 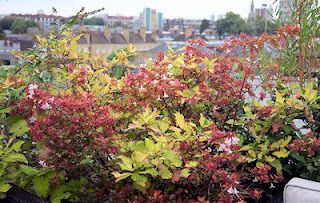 A while ago, I wrote a  post  about how we'd created a roof garden here in Wapping, London.  That was almost a year ago now, and so I thought it time to write a little more about what's been happening in the garden this year and what I've been up to in the garden over the past few weeks. Generally, this time of year is quite dull in the garden.  The tasks at hand are dead-heading and tidying and all the showy summer blooms are coming to an end.  We still have a few roses and fuschias putting in a last flash of colour, but the whole thing is starting to fade to green as autumn creeps on. A few things, such as the mixed tub of cornus and abelia above, as coming into their own at this time of year though.  The last few abelia flowers go wonderfully against the mixed foliage.  As autumn fades, the cornus leaves will fall, leaving the bright red stems which will see through the winter until growth starts again in the spring. Fuschias haven't proved a hu
Read more

- September 02, 2011
This week, we've been hanging around in London. I believe the modern word for it is a "Staycation". The idea is that you treat your home town like a holiday destination - get up at a sensible time in the morning, spend a full day wandering around museums and tourist attractions and then head home in the evening. Of course, London is the ideal place to do this - there are more museums than you could visit in a month, let alone a few days. So, we wrote out a list of all the museums we'd never been to and thought looked interesting and groupd them together into similar areas of town so we could get around a group in a day. By Wednesday (when we finished the staycation and headed out of town for a couple of days) I did feel a little museum'd out; I had grown tired of looking at things in glass cases with little display labels - but it was good tired. The kind of tired you feel after a long but satisfying day - the kind of full you feel after a delicious but
Read more
More posts