I collect coins and banknotes.  Yes, I am aware that makes me “a bit sad” but I like it.  One thing I find fascinating are the mistakes.  The errors.  The coins and banknotes we were never meant to get our grubby little public hands on.

Mistakes in bank note printing are quite common.  The paper flies through the machines at an incredible rate, and folds and other problems with the paper are quite common.  Notes are often miscut, meaning large blank paper flaps remain on the side, for instance. 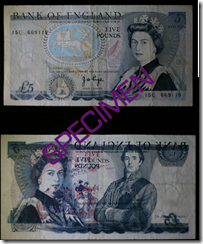 Errors in coins are rarer.  Coins are generally pressed one at a time from blank pieces of metal of the right size.  The lack of flexible paper and post-print cutting makes mistakes rarer than with banknotes – but that doesn’t mean that don’t happen.

Let’s start with a well-known example.  In 2008, the design of UK coins changed.  As part of the change, the date on the 20p coin was moved from one side of the coin to the other.  Some coins were produced with both front and back without a date.  Of course, these coins were never meant to end up in circulation but it seems that a rather large number of them did.  It’s perfectly possible to find one of the coins in your change.  Don’t get too excited though, talk of them being worth “thousands of pounds” is rubbish – a shiny, unscratched example will probably get you around £70 at the most.

But the 20p isn’t the only time a mistake has been made at the mint.  And sometimes the errors have nothing to do with the wrong dies being used.

Coins are made from blank pieces of metal, the right size for the coin, but without the design on.  These fly into a machine which stamps the familiar design onto the coins.  But this process doesn’t always go according to plan.  The quality control at the mint is very good, and most of the time, any coins which aren’t perfect are found and destroyed before reaching circulation, but that’s not always the case.

The picture above shows a 3d from 1956.  It seems that another piece of metal got in the way during the pressing process, and so there’s a circular chunk missing from one side of the coin.

But sometimes something even rarer can happen. Look at this 2p from 1979.

Do not adjust your sets.  There’s nothing wrong with the colour in that picture.  The 2p piece you’re looking at is actually silver.  It’s made of cupro-nickel rather than the usual bronze.  From the 1990s onward, 1p and 2p coins were minted in steel and then plated in copper, but back in 1979 they were made (or supposed to be made) from solid bronze.   So how did that happen?

Well the Royal Mint here in the UK doesn’t just make coins for the UK; they make coins for many countries throughout the world under contract.  The best guess here is that a blank normally used for a non-UK coin the same size as a 2p – but made from cupro-nickel accidentally found its way into the hopper of blanks destined for 2p pieces.  The resulting error didn’t get picked up by the Royal Mint, and the shiny silver 2p made it out into the wild.

So don’t think of collecting coins as simply memorising the designs of the UK pound coin for every year since 1983 or trying to get a complete set of sixpences.  Think of the more interesting items which give an insight into how money is made and why you should always check your change – you never know what you may find!

(All pictures are of items from my private collection – don’t reuse without permission – thanks! D.)