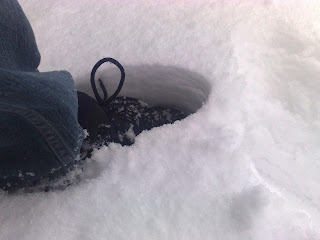 It's cold today. And it's very snowy here in London. That photos is of my foot in our garden.

Of course, there's the usual "why does the UK grind to a halt when it snows?" waffle going on. Well, I had a think about this on the tube this morning, and I think the reason is fairly simple. And it has nothing to do with being unable to build things which work in the snow - I think it's a question of economics.

When building something, or deciding how to invest in the maintenance of that something, you have to make decisions on where to spend the money. So if you are building a train system, you have a scale of importance of the features of the system. Safety is quite high on the scale, slightly above comfort in "normal" conditions. At the other end of the scale, you have the ability of the system to cope with unlikely events.

It's undoubtedly true that that snow like this is pretty rare. As are temperatures in the high 30s. So, the question the designers of transport systems (and buildings for that matter) have to ask themselves is whether it makes economic sense to spend money on coping with these events, or whether it's better to suffer the economic consequences of a complete system shutdown when something unlikely happens.

If would, of course, be possible to build a train system which could run whatever the depth of the snow. And in countries where snow is more common, it makes economic sense to invest the money to make that happen. That's why you tend to find that train systems in countries such as Canada, parts of the US and even Russia, can cope with snow much better than UK systems. It has nothing to do with the quality of UK engineering, nor with the decision making skills of those designing the systems - it's just a simple economic decision.

Human psychology plays a part in this too. People tend to think in the very short-term. So today is a very snowy today, so if the government announced today that they were going to invest billions of pounds in making the transport system snow-proof, most people would nod their heads approvingly. But if the government made the announcement in the height of summer, the press (I'm thinking particularly of the Daily Mail, actually) would complain how wasteful it is to spend money protecting ourselves against something which hardly ever happens.

So, my advice - if you want it - is to enjoy the day off work if you're snowed in. Look out the window, enjoy the lovely views off the snow, drink hot chocolate - and don't spend too much time worrying about the trains not working - it's not the end of the world, is it?